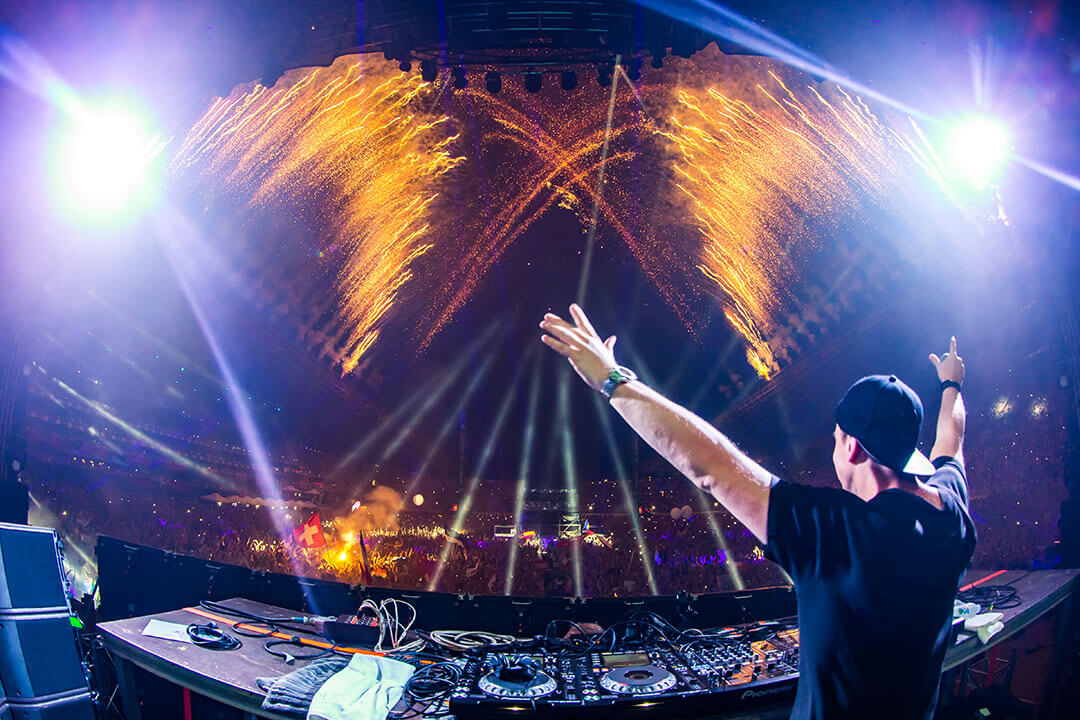 Following its record-breaking edition in 2014, ULTRA Europe – Croatia’s largest ever electronic music event – upped the ante once again in 2015 as it expanded into a historic seven-day extravaganza known as Destination ULTRA.

Destination ULTRA welcomed over 150,000 partygoers across the week as it hosted five momentous events across four equally stunning locations on the Croatian Dalmatian Coast. As always with ULTRA, the world’s most celebrated names in music came together as one to celebrate it all.

Kicking off in true ULTRA style, German legend Sven Väth brought the house down at the newly renovated Giraffe Palm Beach Club in Split with a blissful four-hour vinyl only set. Dancing Astronaut lauded the event, describing it as “the perfect start”, as Väth only wetted the appetite for what was to come over the next six incredible nights.

The three-day flagship ULTRA Europe Festival was officially under way the next day and with it came a mesmerizing brand new Main Stage. With colossal LED screens and a state-of-the-art sound system creating an all-encompassing experience for the Ultranauts in attendance, the Main Stage hosted heavyweights such as Afrojack, Alesso, Armin van Buuren, Axwell^Ingrosso, Dash Berlin, David Guetta, Hardwell, Knife Party, Martin Garrix, Nicky Romero, Steve Angello, Tiësto, Zedd and many more across the festival to a truly rapturous response. Most notably, The Chemical Brothers brought their famed LIVE show to Croatia for the very first time, adding a different flavor to the Main Stage as they played out some of their biggest hits including ‘Go’, ‘Block Rockin’ Beats’ and ‘Hey Boy Hey Girl’ to an adoring crowd.

This year also saw the addition of a fourth arena in the form of the RESISTANCE Stage, powered by the award winning Arcadia Spectacular group. First seen at this year’s ULTRA Music Festival, the ‘Afterburner’ saw the likes of Guy Gerber, Hot Since 82, Jamie Jones, Marco Carola, Nic Fanciulli, Sasha and Solomun take fans on a journey across a spectrum of house and techno music.

The legendary Megastructure switched up genres on a daily basis with drum and bass, techno and trance all being represented across one of ULTRA’s most celebrated stages. The likes of Andy C, Noisia and Wilkinson hosted on the Friday, before ULTRA’s iconic Carl Cox & Friends stage brought a monster three-hour set from Carl to the party alongside support from his ever-growing stable of friends such as Nicole Moudaber, Yousef and Anna on the Saturday. The Megastructure then closed on Sunday this year in the same fashion it does in Miami each year, with an immense lineup of the finest trance DJs around. Andrew Rayel, Markus Schulz, ATB, Paul Van Dyk and many more cranked up the atmosphere to euphoric levels until the early hours of Monday morning.

Last but by no means least, the UMF Radio Stage – now in its second year of existence at ULTRA Europe – brought its customarily eclectic mixture of music, with up-and comers from all corners of the globe bringing showcasing their talents to thousands each day.

With the ULTRA Europe Festival drawing to a close on Monday morning, fans didn’t have to wait long for another party to start, as South African duo, Goldfish, followed things up on the very same day with a disco and saxophone-fueled show at the exclusive ULTRA Yacht Regatta Party on the heavenly island of Brač. 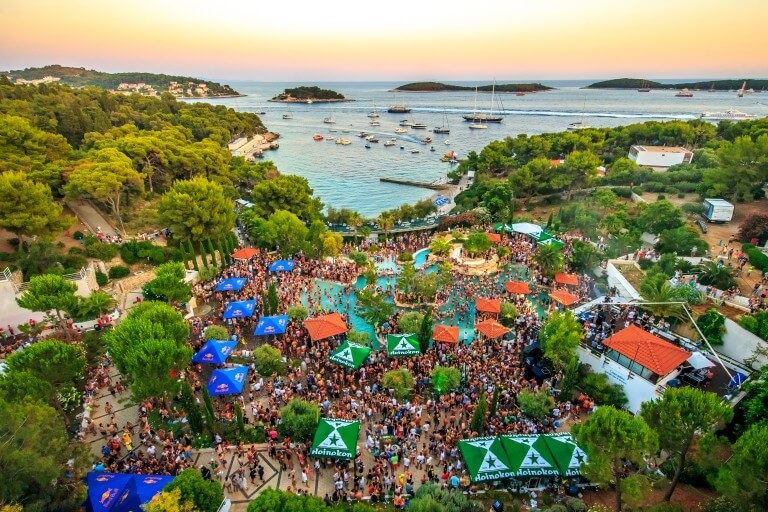 Next up: ULTRA Beach. For the third consecutive year, the SOLD OUT pool party took place on the idyllic island of Hvar where over 5,000 revelers partied at the dazzling Hotel Amfora Grand Beach Resort to the beats of German icon Moguai, progressive house power duo Sunnery James & Ryan Marciano, future house extraordinaire Oliver Heldens and Dutch superstar Fedde Le Grand, as they teamed up to make it the biggest Ultra pool party to date.

As the week drew to a close, ULTRA arguably saved their finest destination until last, as Joris Voorn and Nic Fanciulli ran a Resistance themed Closing Party from within the historic 200 year old Fort George—a truly awe-inspiring venue on the island of Vis that needs to be seen to be believed.

With the third historic chapter of ULTRA Europe wrapped up, all roads now lead to an even bigger 2016. For further information and updates on ULTRA Europe, head to ultraeurope.com.

The internationally renowned festival, which has taken place every March since its inception, celebrated its seventeenth anniversary from March 27-29, 2015 by bringing over 165,000 music enthusiasts to the sold out waterfront event in the heart of the City of Miami. Ultra Music Festival returns to Bayfront Park for its eighteenth annual edition, 18-20 March 2016.

Choosing to follow a unique, creative vision and a wholly organic growth focused around a true love for music, artists, and fans alike, the ULTRA and ULTRA Worldwide brands represent not only the world’s biggest and most successful remaining INDEPENDENT electronic music festival brand, they are now the most international of any festival brand in the world by far. The event organizers continue to transport the unrivalled experience from the Miami flagship festival to an ever-growing number of destinations and fans all over the globe.

Over the past seventeen years, literally thousands of the world’s most iconic DJs, producers and live acts have mesmerized audiences with awe-inspiring sets at ULTRA festivals in ARGENTINA, BRAZIL, CHILE, CROATIA, IBIZA, JAPAN, KOREA, SOUTH AFRICA and of course MIAMI, as well as ROAD TO ULTRA events in CHILE, COLOMBIA, MACAU, PARAGUAY, SEOUL, TAIWAN, THAILAND, TOKYO, USA, and now forthcoming events in BOLIVIA, BRAZIL, SINGAPORE, THE PHILIPPINES as well as ULTRA BEACH – BALI. Each and every new global edition is founded on the same successful recipe that has been perfected over seventeen years in Miami, combining the most diverse electronic talent with the most technologically advanced, large-scale festival productions in the world.

In addition, the ULTRA brands pioneered the live stream experience, ‘ULTRA LIVE’ (whereby the festival is brought online to over 20 million unique viewers globally) and the audio broadcasting platform ‘UMF RADIO’ (syndicated to FM Radio in over 42 countries and reaching more than 22 million listeners weekly). Also ‘UMF FILMS’ collaboration with FINALKID has seen some of the most visually breathtaking festival aftermovies in the music space, including a feature-length documentary exploring the latest explosion of dance music, entitled CAN U FEEL IT, which premiered at the Ultra Music Festival, Miami 2012 and was exhibited in over 500 theaters across the Unites States.

In 2014, the ULTRA and ULTRA WORLDWIDE brands continued to push the boundaries, bringing an unparalleled combination of cutting edge production and the world’s best electronic acts back to previous strongholds and new frontiers across the globe. With its most recent new festival editions breaking records in JAPAN in September 2014, SOUTH AFRICA in February 2015 and KOREA in June 2015, and with the addition of the many new ROAD TO ULTRA events, the ULTRA brand has now united SIXTEEN COUNTRIES across FIVE CONTINENTS worldwide.